In the writings of the Chinese philosopher Chuang Tzu, there is an anecdote about an ancient tree that people called 'useless'. It had a knotted trunk and twisted branches; so nobody wanted to cut it down - its wood couldn't be used for anything. The tree was therefore left to grow undisturbed. It could just be a tree and continued to grow year after year. It flourished. 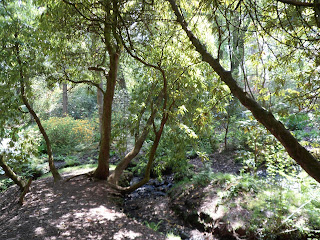 Something about this story fascinates me. Not that I think being useless is good in itself; but rather that we tend to think of things mostly in terms of how we can use them. We buy things that are useful, we value things for being useful. Nothing wrong with that, but isn't there something beyond this?

There's something special about seeing things as being fine just as they are without wanting to do something to them or with them - a beautiful sunset, a walk in the woods...  plants and animals too - an orangutan in the rainforest, a wild orchid in an undisturbed habitat....

When it comes to people though, our expectation may be that they have to be useful to us. How much of an insult is it to say to someone that they are 'useless'? Would we accuse an orangutan of being useless? Probably not.

I'm not suggesting that it's bad to do useful things, far from it.  However it seems to me, that there is something beyond this usefulness that is important too, something we might need in order to flourish ourselves.  Sometimes in our busy lives, we might lose sight of it.